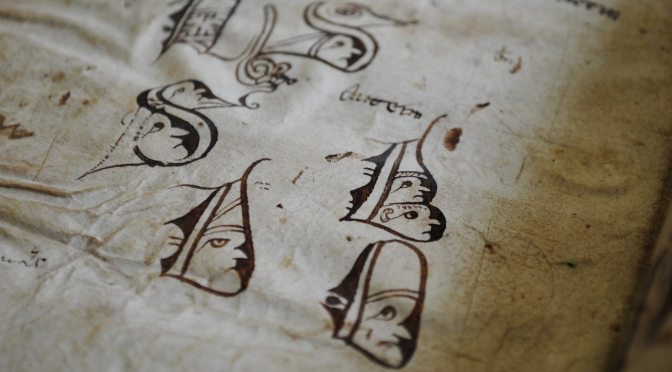 Doodling is something we all do, from time to time, often without realising. Listening to someone on the phone or perhaps attending a meeting (or class), we scribble, rather haphazardly and spontaneously, squiggly lines, random words, and mini drawings. The practice is quite old. Doodled squiggly lines and mini drawings are encountered frequently in medieval books, mostly in the margins or on flyleaves. The one in Figure 1 was added to the lower margin of a manuscript with Juvenal’s Satires. Its style resembles our modern stick figures and it may just be the artistic creation of a child.

In spite of the parallel with modern times, the rationale behind doodling in manuscripts is usually very different. Exceptions such as the one in Figure 1 aside, the medieval practice of doodling has little to do with boredom or absent-minded pen movements. They are calculated products of the pen, executed with a particular goal in mind.

The answer to this question lies in the two tools wielded by medieval scribes more than any other instrument. In miniatures scribes are often shown with a pen in one hand and a knife in the other, such as the hermit seen copying text from an exemplar in Figure 2. (Note, incidentally, the handy paraphernalia he has at his disposal, like the slider that helped him keep track of the line he was supposed to copy.) Here we see the scribe using the tip of the knife to keep the parchment in place: using his hands would release oily grease onto the writing surface, which would subsequently prevent the ink from sticking properly.

An equally important use of the knife, however, was to adjust the nib; and it is here that the origins of the pen trial – and the doodle – are found. After some time, a few hours perhaps, the nib became dull and it needed to be cut again in order to produce crisp letters. After trimming the nib, the scribe tested his pen to check that it had the right width and to make sure there would be no streaks of white visible within the strokes of the letters. For this testing process he turned to an empty piece of paper or parchment and scribbled down some squiggly lines or short words. The process was quick and routine among scribes across medieval Europe (Figure 3).

Pen trials, which are most often encountered on flyleaves in the back of manuscripts, can be quite appealing. As it happened, scribes did not just write down squiggly lines or words when testing their pens, but they even produced modest works of art. In Leiden University Library some great “artistic” specimens are encountered. In the back of BPL 111-I, for example, we find a collection of large initial letters with faces inside them (Figure 3). It includes a letter B with two monks (note the tonsures), a D with a stern-looking lady wearing a pointy hat, a bearded person in a letter S, and a duck containing a long-nosed man. This page and the facing one are filled with dozens of pen trials. The shapes of the letters and the ink colour suggests that the doodles on these pages were produced by a limited number of individuals, perhaps two or three, which is in line with what we commonly see on flyleaves that contain pen trials.

The two pages in the back of BPL 111-I are also in line with broader European traditions regarding the kind of tests they contain. We encounter single letters and words, as well as nonsensical phrases (“e,” “egi de e,” “ego panne,” “autem”). Another popular theme is also found in Figure 3: musical notation (somewhat out of focus near the top of the picture). The square notes of the Middle Ages were perfect for testing the nib, because they naturally showed how wide it was, while the short square shape also invited the scribe to execute a series of quick test strokes. Common also are the little specks visible in Figure 3: you can vaguely see them in the white zone below the initial letters. These result from tapping the quill on the parchment, probably in an attempt to adjust the nib by “tapping” it into shape.

While the pen trials in Figure 3 were executed by perhaps two or three individuals, there could be far more scribes involved. Figure 4 shows a page in a ninth-century manuscript. Present in the back of the last quire, it was left blank because the text had already ended. Some three centuries later, likely in the second half of the twelfth century, the page was filled with pen trials by least fifteen scribes. We are probably looking at a group of individuals in the same scriptorium, who favoured very different “doodles” for testing their pen, from alphabets to a small portrait. And the musical notation appears as well, at various locations. A similar case where a large group of individuals share the same empty page is found in a set of manuscripts from Rochester Priory in Kent, now Oxford, Bodleian Library, MSS Bodley 340 and 342 (Figure 5). Several individuals from the early twelfth-century wrote down short passages on their flyleaves, including – with a peculiar sense of appropriateness – the phrase probatio pennae, “I test my pen” (near the top of the detail shown in Figure 5).

Groups of pen trials from a medieval scriptorium can be important sources of information about scribal practices and the backgrounds of scribes. Those in the back of Bodley 340 and 342, for example, show that the scriptorium of Rochester Abbey was filled with individuals who were trained across the European Continent, including in Germany, Holland and Italy (see Kwakkel, “Hidden in Plain Sight”). This verdict is based on the letter shapes of the pen trials, which reveal where their makers are from: scribes were trained to produce slightly different letter shapes all over Europe, which shows in the pen trials. By proxy, the page in Figure 5 highlights the ethnical diversity of the monks in Rochester Abbey.

Sometimes one encounters truly special collections of pen trials. Leiden University Library holds a loose double-leaf filled with an unusual amount of them (Figure 6). Its existence adds significantly to our understanding of medieval pen trials. One may be inclined to think that scribes always turned to empty pages in the back of existing manuscripts and filled them pen trials. While this happened, as the previous cases show, there is also another practice at play. The Leiden sheet suggests that scribes also used loose – i.e. unbound – sheets, which likely lay on their desk. Some of these “test sheets” were repurposed and turned into flyleaves, making it look, to somebody observing the pen trials today, as if they were directly written into the book.

This particular test sheet was filled to the brim with several hundred pen trials: there are more than I have ever seen in one location (note that Figure 6 shows only a detail). When one looks carefully, running themes can be observed across the page, sometimes clustered in the same location. There is the large capital letter H that is frequently drawn, especially near the top of the page; and there are recurring human figures as well, such as a grumpy lady, a man with curly hair, and a few bishops. Another theme is the nota sign, the attention sign that is encountered in the margins of manuscripts: quite a few are observed under the two red arches (they look like “nt” with a curly line over top). There are as many as ten individuals at work on this sheet, which suggests this sheet, too, was used in a scriptorium.

Another test sheet is seen in Figure 7. It was used by a single scribe, who used the crumbly sheet to write down letters, parts of religious verses, and non-sensicle expressions. Here the earlier purpose is clearly visible through the rough and well-used appearance of the flyleaf. It concerns a piece that was ripped off of a larger paper sheet and subsequently used for testing the pen. At a later stage it was repurposed as a flyleaf. Figures 6 and 7 show us the far ends of the spectrum of medieval test sheets: some were inhabited with words and doodles by a group of individuals, as indicated by the variations in ink color, letter shape, and nib width, while others were tools used by single scribes.

This is an expanded and modified version of a post that first appeared on Leiden Medievalists Blog.