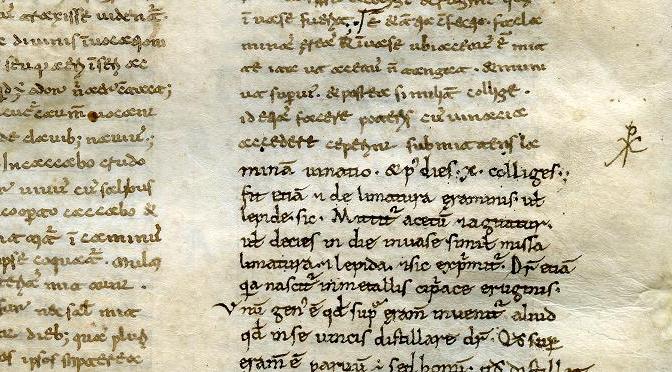 This week one of my MA-students expressed he wanted to write his thesis on MS VLQ 1 in the Leiden University Library. The manuscript in question contains an alphabetized version of Dioscorides’ De materia medica. It belonged to a copy presented in several parts, but the others have all been lost, it seems (VLQ 1 contains the Preface and Acorus through Ficus maritima). It was made in or nearby the Benedictine abbey of Monte Cassino in the late eleventh century. This monastery is known for its high-end illuminated manuscripts written in Beneventan script. Thumbing through VLQ 1, however, quickly shows that this is not such a book. Not a single decorative element is encountered in the manuscript and the parchment is of particularly poor quality: some folia contain pronounced follicle patterns, translucent patches or a yellow discoloration; others contain cuts or gaps at the edge of the page.

The manuscript’s most notable feature, however, is the mix of scripts on its pages. The first scribe, who copied f. 1r to f. 13v, line 36, includes such familiar Beneventan letter forms as the a that looks like ac, the enlarged e that looks like a t with a circle on top, and the ti ligature. Curiously, the two remaining hands in the volume used Caroline Minuscule. The first of these takes over in line 37 of f. 13v, halfway through a sentence (see image). The transition is marked by a “barred” capital “P” in the margin, contemporary and perhaps executed by the first hand. A third individual copied the remainder of the manuscript (f. 32v). The script suggests the first scribe was trained in the Beneventan zone (Monte Cassino and its surroundings); the others came from elsewhere.

Monte-Cassino expert Francis Newton relates the coexistence and mixed application of Beneventan and Caroline in Southern-Italian scriptoria to status and the purpose of a book. High-quality manuscripts with gold and colored initials, which he calls Nobilissimi or most noble books, are always copied in Beneventan script. This category consists of display books and liturgical manuscripts. One step down in the hierarchy there are the Notabiliores, or more notable books, commonly with patristic and classical contents as well as contemporary medieval texts, predominantly written in Beneventan script entirely. The lowest tier on Newton’s ladder is a class he calls Viliores, or more common books. This is where we may situate VLQ 1. These manuscripts, which may be partly written in Beneventan and partly in Caroline, contain works on such topics as dialectic, grammar, law and medicine. These plain objects were likely made for school use or scholarly pursuit.

Thus, the Leiden Dioscorides is common but not ordinary: the object holds an every-day text that was produced under unusual circumstances, in a scriptorium where scribes from different origins found common ground in the books they copied. I can’t wait to see what the MA-thesis will uncover about this most intriguing book.